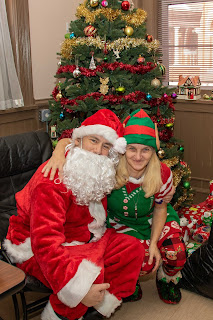 “I got emotional. These kids were overwhelmed with joy.”

Volunteer John Knight was overjoyed himself. He got to dress up as Santa Claus, chat with over 30 children, and hand out gifts along with helper elf Lynda Schmelcher.

This is the second year John played Santa at Mother Marianne's West Side Kitchen.

The gifts they handed out – for children aged one to 12 -- were all donated.

Outreach Coordinator Nancy Robert pointed to the VFW in Remsen, which donated four bags of toys, as well as several anonymous donors.


“At one point,” John said, holding his thumb and finger an inch apart, “we were ‘this close’ to running out.”

And then a man appeared out of nowhere with three bags of toys.

Nancy said they wanted to do something special for the children – and, as it turns out, on a day when the soup kitchen was packed. “We served 186 meals,” Director Ed Morgan noted.

The effort, declared Santa John,  “was a huge success.”

Nancy noted that John bought his own Santa suit.

“I love passing the Christmas spirit.”