Joanne Lockwood and Rick Roberts were already on a journey when they stepped up to become part of the organizing committee that launched Mother Marianne's West Side Kitchen in March 2008. 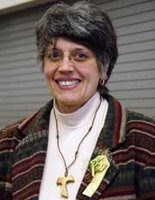 Serving lunch Monday through Saturday to the homeless, the jobless and the working poor, and last month reaching a milestone of over 25,000 meals, the soup kitchen is a reflection of their journey -- a journey to live the Gospel life as Franciscans.

After two years of formation that included study, spiritual reflection, prayer and challenging dialogue, Joanne and Rick made their permanent profession into the Secular Franciscan Order on Sunday, June 21, during a 2 p.m. Mass at St. Joseph-St. Patrick Church. 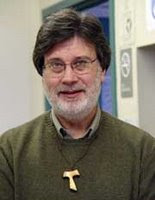 Franciscans from the parish's St. Joseph Fraternity were there, along with family and friends, soup kitchen volunteers and even a few soup kitchen clients. Fr. Richard Dellos, pastor, and Fr. Kevin Kenny, OFM Conv., a Franciscan friar who directs the Bl. Kateri Tekakwitha National Shrine in Fonda, celebrated the Mass. Father Kevin presided at the rite of profession, along with Fraternity Minister Katie Koscinski, SFO, and Formation Director Mary Stronach, SFO.

"Do you wish to embrace the gospel way of life by following the example and words of St. Francis of Assisi, which are at the heart of the Rule of the Secular Franciscan Order?" Father Kevin asked.

After a few more questions, each of them made the profession, declaring:

"I, (Joanne/Rick), by the grace of God, renew my baptismal promises and consecrate myself to the service of his Kingdom. Therefore, in my secular state, I promise to live all the days of my life the gospel of our Lord Jesus Christ in the Secular Franciscan Order by observing its rule of life. May the grace of the Holy Spirit, the intercession of the Blessed Virgin Mary and our holy father St. Francis, and the fraternal bonds of community always be my help, so that I may reach the goal of perfect Christian love."

"I confirm your commitment in the name of the church," Father Kevin declared.

Joanne and her husband, Richard, have three sons. As a volunteer, she is the soup kitchen's daytime supervisor. She is an avid crocheter and motorcycle enthusiast. She has been primarily a homemaker and, for two years, she worked in the kitchen at Poland Central School. Joanne is a parishioner at St. Joseph-St. Patrick. Prior to joining the parish, she was a catechist with St. Leo's Church in Holland Patent. She grew up in East Utica and is a graduate of Proctor High School.

Rick and his wife, Rose, have two sons and a daughter. He is a special education math teacher at JFK Middle School in Utica. A graduate of SUNYIT, he went on to earn his master's in special education from SUNY New Paltz. He grew up in Utica and graduated from JFK when it was still a high school. In his spare time, Rick enjoys gardening and landscaping. An adult convert to Catholicism, he is a parishioner at St. Joseph-St. Patrick.

"By your lifelong profession to go from Gospel to life and life to Gospel, may you continually encounter the living and active person of Christ."

"May you conform your thoughts and deeds to those of Christ and build a more fraternal and evangelical world by fulfilling your vocation as a 'brother and sister of penance'."

Now Joanne and Rick can append the "SFO" designation after their names, signifying that they are professed members of the Secular Franciscan Order -- a canonically established order recognized by the Vatican as part of the Franciscan family.

Posted by Robert Stronach, writer/photographer at 7:25 PM No comments: