'It Helped Me Grow Spiritually'

Volunteers at Mother Marianne's West Side Kitchen often see themselves as on a spiritual journey. Take the children at St. Mary's in Clinton, who describe their coming to the soup kitchen as putting faith into action. Or the Secular Franciscans who see volunteering as part of their commitment to live the Gospel. 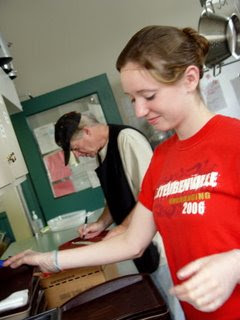 And there's Melissa McCann, a young college-age woman who has been showing up nearly every Wednesday since September, and who describes her experience as both fun and as a "great way to look outside of myself and see other needs in the community."

Next Wesdnesday will be her last day at the soup kitchen, as she will head to Nashville that weekend to enter the Dominican Sisters of St. Cecilia.

After visiting the Dominican Sisters three times over the past few months, and participating in a May vocations retreat there, Melissa formally applied to enter the order.

"I was notified of my acceptance last week," she beamed. Noting that she also had visited other orders, she said: "This is the only one I really wanted to go back to. I just knew it was the right one, where I could be myself."

She will begin a year of postulancy -- a year of living-the-life discernment -- while at the same time enrolling as a full-time student at Aquinas College, which the Dominicans own. After postulancy is a year of canonical novitiate. She would then make temporary vows for three years, and again for another two years, before making her permanent commitment. And during that time she would be working toward a teaching degree.

Noted Melissa: "I knew I wanted to enter the religious life when I started volunteering here at the soup kitchen. But it helped me grow spiritually." 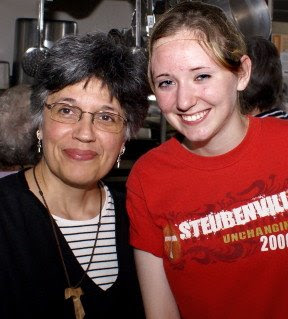