People who don’t access regular healthcare may suddenly find themselves the victims of silent killers like heart disease, high blood pressure, and diabetes.

That’s why Dr. Mark Warfel was interested in reaching out to the underserved population through Mother Marianne’s West Side Kitchen (after outreach volunteer Nancy Robert approached him about doing health screenings at the soup kitchen).

A Big Heart and A Little Soul 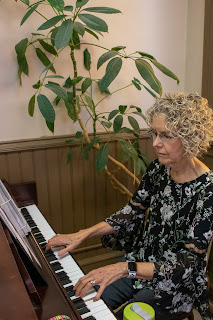 Many of our volunteers bring a big heart to Mother Marianne’s West Side Kitchen, caring for guests like they were family.

Some bring a bit of soul, breathing music into the air.

During the soup kitchen’s rededication day (Oct. 9), Bernadette VanValkenburg was playing the piano at one end of the dining hall, pouring out the joyful strains of “Jesu, Joy of Man’s Destiny.”

She simply notes: “When they have enough help in the kitchen, I play the piano.”

At the other end of the hall, Bob Schmelcher was playing “How Great Thou Art” on a curious instrument called an “echo harp.” It holds several harmonicas in a semi-circle cage, providing Bob quick access to a broader range of keys and notes.

It rained a little that recent Tuesday morning, but then the sun peered from behind the clouds, bathing the entrance to Mother Marianne’s West Side Kitchen with bright, warm rays. Sunlight also glistened off four black bicycle racks. 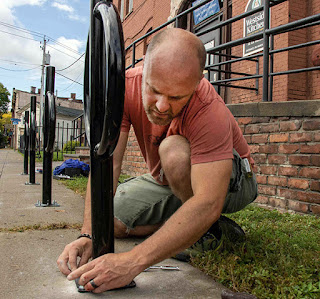 Matt VanSlyke of Utica Bike Rescue squatted close to the sidewalk as he bolted a rack to the concrete.

The four new racks, capable of accommodating eight bikes, were being installed as a community service.

Matt, by the way, is executive director of Utica Bike Rescue and not unsurprisingly, an avid bicyclist. Their mission is to promote bicycling as a healthy lifestyle while refurbishing bikes, promoting bike safety and providing bikes to “children, students, refugees and lower-income households.”


Read more »
Posted by Robert Stronach, writer/photographer at 8:00 AM No comments: