Andy Lazarek was wiping down tables, occasionally chatting with

soup kitchen guests Wednesday. Helping out on-and-off for a year, he is unabashed in his praise for the all-volunteer staff.

"These are the most wonderful people in the world here."

Behind Andy, Franciscan Sister Roberta Southwick, SA, was playing old tunes on an organ, serenading guests with ballads like "Heart of My Heart" and occasionally stepping up the tempo with such numbers as "La Cucaracha".

Wayne sat near the music, his duffel bag nearby and white cane at his feet. Between songs he exchanged quips and laughs with Sister Roberta.

"I call that 'Wayne's World'," she said, pointing to the duffel bag. 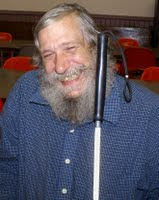 Wayne laughed in agreement. "That is my whole world." The rolling duffel bag not only has wheels, but also skis for winter. It contains a gazebo with tent, coats, clothes and assorted amenities. A practical outfit for a blind homeless guy.

"Did you hear Wayne is back on the streets?" whispered kitchen supervisor Joanne Lockwood, SFO.

He lingered, enjoying the music, even after most guests had left. A man came in and called to him, that it was time to go.

Joanne noted that the man had spoken to his landlord about giving Wayne a place to stay, and they were going over to meet him.

Andy and other volunteers (Mike McMyler, John McCabe and Betty Frank, SFO) were picking up the pace to clean up the room.

And Sister Roberta, back at the keyboard playing "Beer Barrel Polka," simply said:

"You need peppy music to clean the tables by."
Posted by Robert Stronach, writer/photographer at 12:51 AM