Three teenagers spent some time making sandwiches at the soup kitchen Wednesday morning, and then made up a batch of granola to use as a yogurt topping. Peter Woolschlager, SFO, the father of two of the teens, was also helping out.

Ever since he heard about Mother Marianne's West Side Kitchen at a regional Secular Franciscan meeting, Peter said, he has been thinking about stopping in to volunteer for a day, and bring some people with him. Peter lives in Croghan, well over an hour's drive north, and he brought along daughters Lillia, 13, and Adriana, 15, and their school friend, Nicole Hall, 16.

"We made salami and bologna sandwiches," quipped Lillia. "It was great."

Added Nicole: "I just like being able to come and help people. There's not many soup kitchens up in our area."

"It's really rural," explained Peter, who is a teacher and a Secular Franciscan who heads St. Stephen's Fraternity in Croghan.

This was not the first time that Adriana and Nicole traveled some distance to volunteer at a soup kitchen. In fact, each was proudly wearing a simple necklace of a small wooden Franciscan Tau cross on a brown cord -- gifts they received after working at St. Francis Inn in Philadelphia, where Franciscan friars and volunteers feed 350 people a day and provide an isle of peace in a neighborhood of violence and addiction. 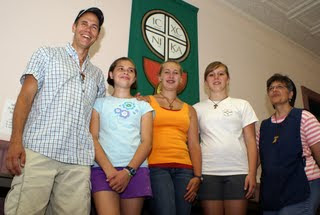 Posted by Robert Stronach, writer/photographer at 12:59 AM