John Knight was observing the line of people winding its way through the soup kitchen, getting take-out meals before heading his way. In fact, he was the center of attention because he wearing a white beard and red suit.

“Merry Christmas,” he shouted repeatedly. “Be sure to get your gifts.” 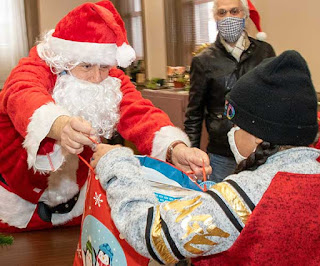 Mrs. Claus, an elf and other helpers were giving out bags of personal care items, hats, scarves, gloves, masks, and sweet treats. Santa himself paid special attention to the children, handing over shopping bags full of presents.

It was the second week in a row that Santa showed up at the soup kitchen. His appearance last week was primarily for the kids. This week every adult and child received presents.

The soup kitchen was particularly busy, serving 178 meals in one hour while guests followed COVID-19 guidelines to wear masks and stay at least six feet apart.

“I was afraid we were going to run out of things,” Santa John said later. In fact, they did run out of sweets – just as a volunteer showed up with boxes of doughnuts and pastries donated by Holland Farms, Price Chopper and Panera Bread.

Then, when they only “had four masks left,” West Side Boutique Coordinator Nancy Robert “walked in with a box of them.”

Apparently just-in-time donations are not unusual.

“It’s like a miracle,” Santa John quipped. “It seems like someone shows up just when we need something.” 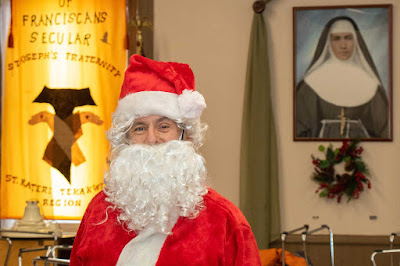 Posted by Robert Stronach, writer/photographer at 11:41 AM