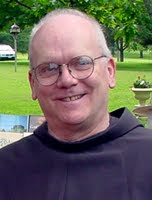 We didn't get to know Friar Kevin Kenny, OFM Conv., until long after he had spent months in Assisi, home of Saint Francis.

We didn't get to know him until long after he had been a teacher in Pittsburgh, and vocation director at St. Francis Seminary on Staten Island.

We didn't get to know him until long after he had left New York City, where he ministered to the homeless, prostitutes and runaway kids.

We did get to know him after he was appointed director of Bl. Kateri National Shrine and Indian Museum in Fonda, NY, and especially after he was appointed spiritual assistant to the Secular Franciscans of St. Joseph Fraternity at St. Joseph-St. Patrick Church, Utica. And he got to know us. He participated in our monthly gatherings, presided at liturgical services and witnessed our professions. He listened, he shared insight and laughter, he became our brother.

When we Secular Franciscans helped launch Mother Marianne's West Side Kitchen, he encouraged us to, like Dorothy Day, accept everyone coming to our door without any preconceptions, and he admonished us to avoid exploiting our guests, even if they gave permission to use a name or photo. He spoke passionately from his own soup kitchen experience in the Big Apple.

Oh my! We know neither the day nor the hour. He served generously. May God give him Peace.