People Are Good to Us

The Utica Common Council honored the volunteers of Mother Marianne's West Side Kitchen this week with a proclamation and a good citizenship award.

Council member James Zecca read the proclamation "praising Mother Marianne's West Side Kitchen and volunteers on the occasion of their first anniversary," and then displayed the "West Utica Good Citizenship Award" presented to volunteers "in recognition of their community service to helping others in need." 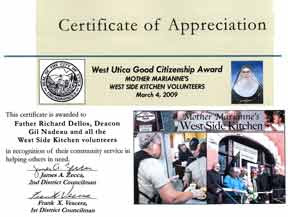 -- noted that the soup kitchen was named after Blessed Mother Marianne Cope, the parish daughter who went on to devote the last 30 years of her life as a Franciscan missionary to the lepers of Hawaii's Molokai.

-- cited the "150 kitchen volunteers" who "have served nearly 20,000 lunches and logged over 10,000 volunteer hours serving the poor and homeless in our community." 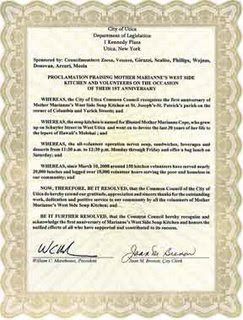 -- extended the Common Council's "gratitude, appreciation and sincere thanks for the outstanding work, dedication and positive service to our community."

-- honored "the unified efforts of all who have supported and contributed" to the soup kitchen's "success."

The presentation, originally scheduled two weeks earlier, was postponed when a resident attending the council meeting suffered a fatal heart attack and the meeting abruptly ended. In accepting the proclamation and award, Frank invited city officials to visit the soup kitchen any weekday between 11:30 and 12:30, and said the volunteers were grateful to the community for all the support the operation has received.

Frank, a professed Secular Franciscan who helped organize the Mother Marianne Prayer Group and Shrine at the parish, added:

"People are good to us."
Posted by Robert Stronach, writer/photographer at 2:38 PM